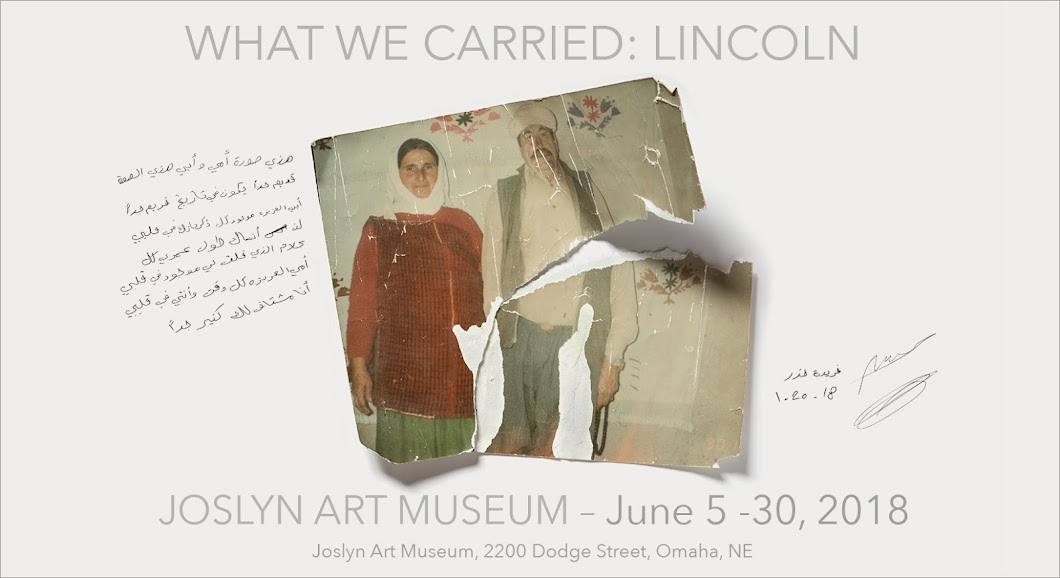 
Yazidis are a tiny religious minority largely from northern Iraq — fewer than a million worldwide. For centuries the Yazidis have faced persecution for their faith. The Yazidi faith combines elements of Judaism, Christianity, Islam, Manichaeism and the ancient, pre-Islamic Zoroastrianism. Since 2014, ISIS captured and killed thousands of Yazidis in what the United Nations has described as genocide. Over the years, the Yazidi community in Lincoln, Nebraska has grown to about 3,000 people, making it the largest in the United States.  Lincoln started resettling Yazidis in large numbers, many of them translators for the U.S. army. Over the years, more refugees have been drawn to the city for its affordable rents and safe neighborhoods. – By Reema Khrais (Excerpt).

What We Carried: Lincoln, Nebraska is a collaborative photographic storytelling project with the Yazidi community and photographer Jim Lommasson. The project began in early 2017 when Lommasson participated in Conflict and Consequences: Photographing War and Its Aftermath at the Sheldon Museum of Art in Lincoln. While in Lincoln Lommason worked with Nebraska Mosaic and the Yazidi community. He asked the participating Yazidis to share items they brought with them on their journey from Northern Iraq to the US. Lommasson then created a photograph and requested that each participant write a personal reflection directly on the photograph about their journey from Northern Iraq. The project aims to present the experiences of refugees and create a platform for further discussion.
Lommasson feels that the Lincoln Yazidi story needs to be told. Lincoln is currently home to the largest population of Yazidis in the United States.

What We Carried: Lincoln is currently on view at The Nebraska History Museum. January 26 - May 25, 2018.

Lommasson’s What We Carried project is an ongoing collaboration with Iraqi and Syrian refugees who have come to the U.S.  Lommasson has worked with refugees in Boston, Chicago, Dearborn, Atlanta, San Diego, Portland, Houston and now Lincoln.

The What We Carried exhibition is currently traveling America and will be on view at The Ellis Island Immigration Museum Memorial Day through Labor Day 2019.
at February 25, 2018 No comments: 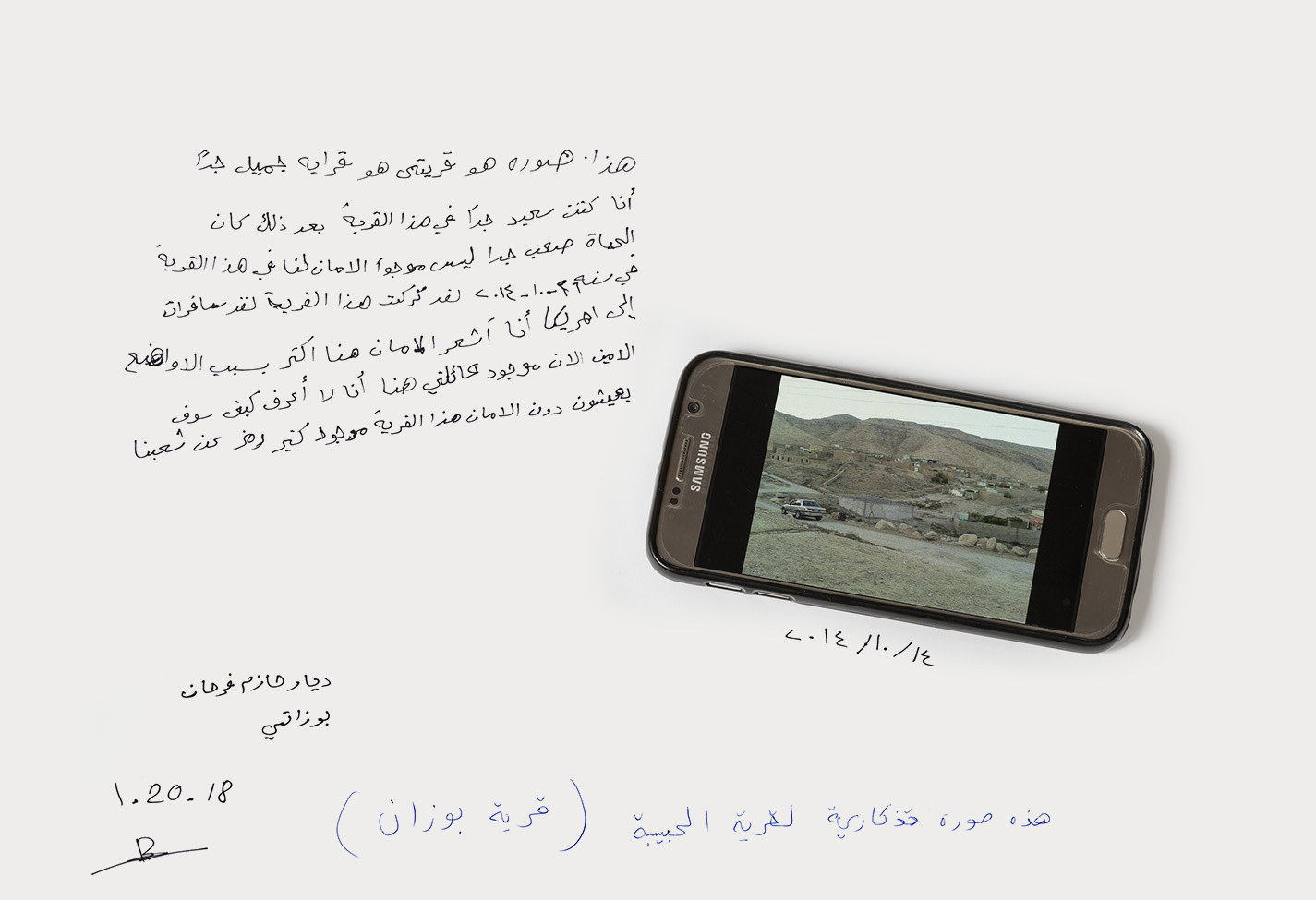 This is my town and it’s a very beautiful town. I was happy in this town; then life became hard and we lost the safety we had in this town. On October 26, 2014, I left this town and travelled (migrated) to the U.S. I feel more safe here because of the current situation back there. My family lives there and I don’t know how they live without safety. In this town there are many Yazidi symbols. – Diar Hazim Farhan Albozani, Lincoln, Nebraska 2018 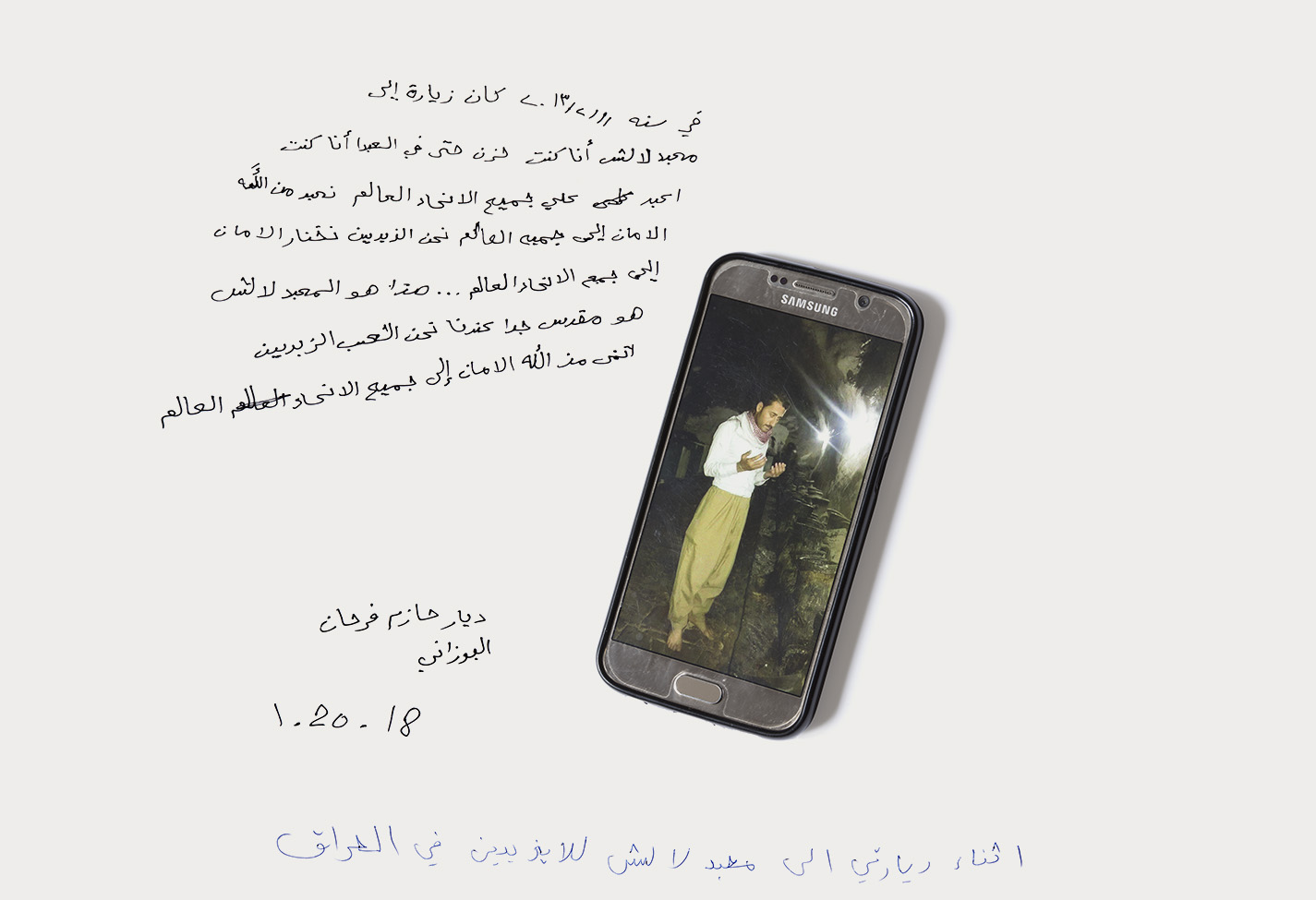 This picture was taken back on Feb 11, 2013 while I was praying at Lalish temple. I prayed for the whole world to be safe and sound. We as Yezidis always pray for all human kind and call for peace and safety. – Diar Hazim Farhan Albozani, Lincoln, Nebraska 2018 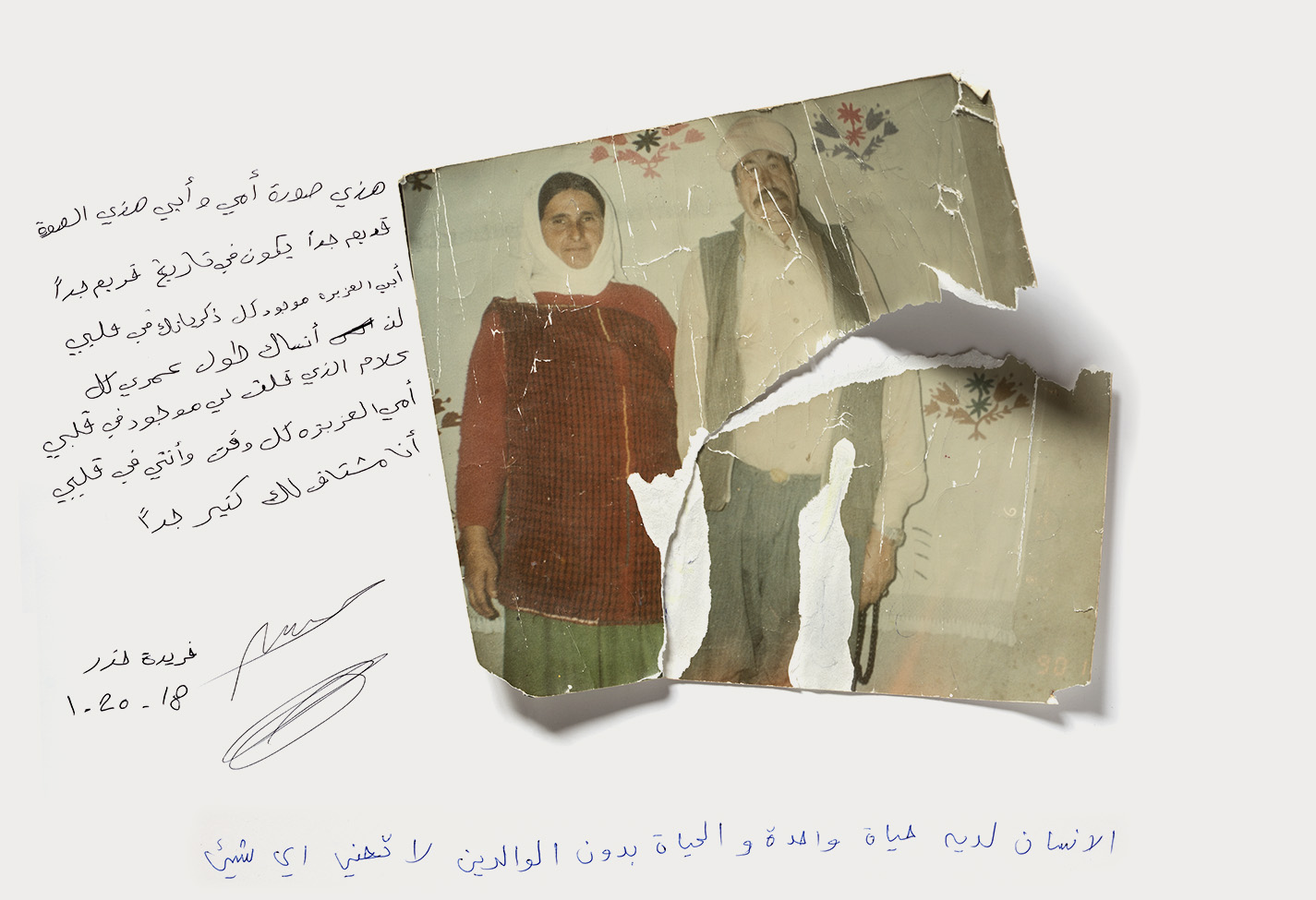 This is a photo of my mother and father. This photo is very old. Everything about my father remains in my mind, and will be with me as long as I live. Everything he has said to me is still with me to this day. My mother is always on my mind and I miss her so so much. People have one life, and a life without parents means nothing. – Amir Hassan, Lincoln, Nebraska 2017 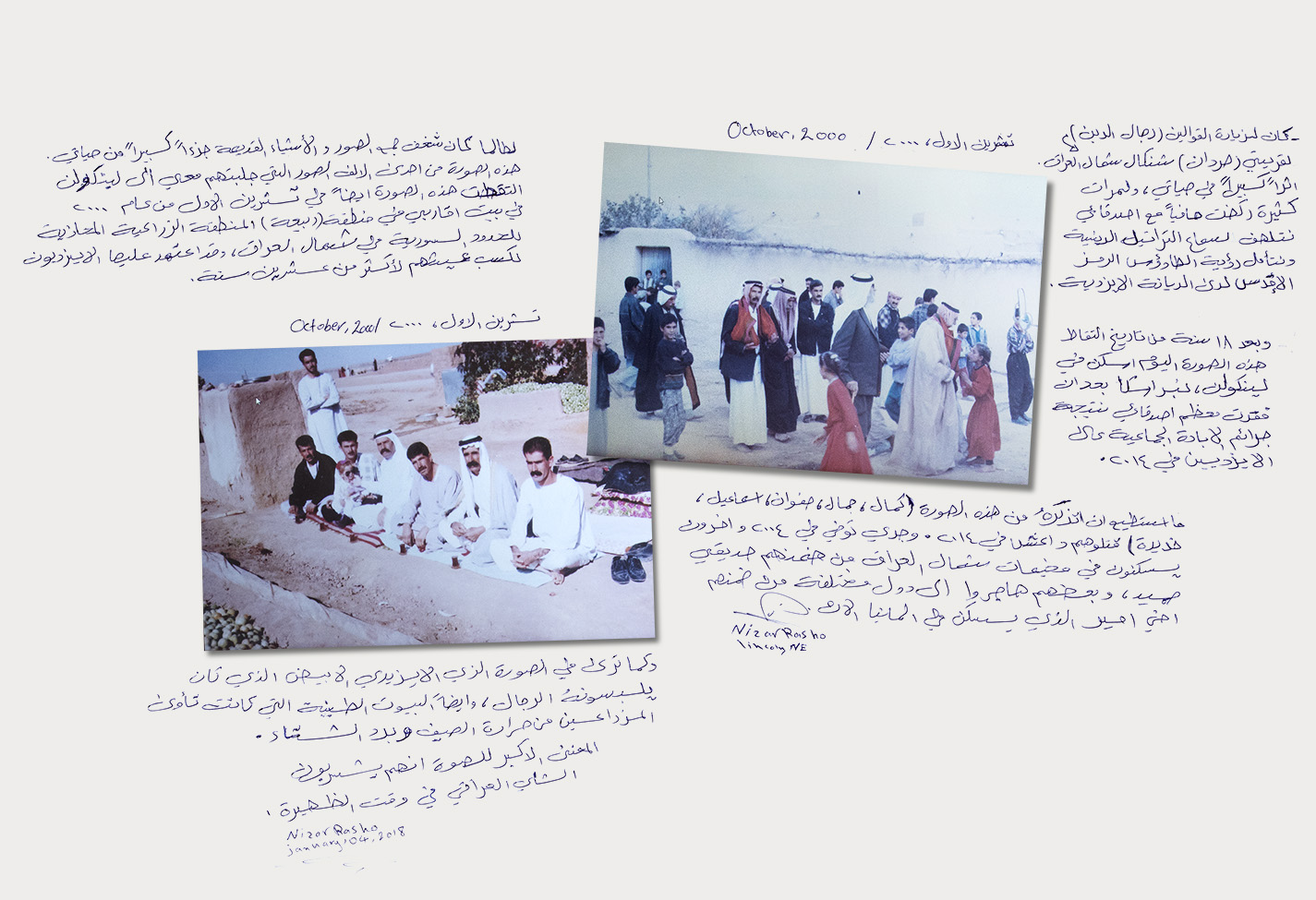 Left Photo: It has always been a huge passion of mine to collect photos and old things. This picture is one of the thousands that I brought with me to Lincoln. It was taken in October 2000 in my relatives’ home that was located in an agricultural district of Rabia, adjacent to the Syrian border in northern Iraq. Yazidis have relied on farming for their living for more than twenty years. As you can see in the picture, the white Yazidi uniform is worn by men. The mud houses protect farmers from the summer heat and the winter cold. The larger meaning of this picture is that they drink Iraqi tea in the afternoon. Right Photo: The visiting of clergymen in my village (Hirdan – Shingal) in northern Iraq was a great influence in my life. Many times I ran barefoot with my friends, eager to hear the religious chanting and contemplating and seeing the peacock as the sacred symbol of the Yezidi religion. Today I live in Lincoln, Nebraska, eighteen years after the photo was taken. After losing most of my friends as a result of the Yazidi genocide in 2014, what I can remember from this photo is (Kamal, Jamal, Safwan, Ismail and Khadida) were killed by ISIS in 2014. My grandfather died in 2004. Others live in camps in northern Iraq including my friend Hamid. Others have emigrated to different countries including my brother Amir, who now lives in Germany. – Nizar Rosho, Lincoln, Nebraska 2017 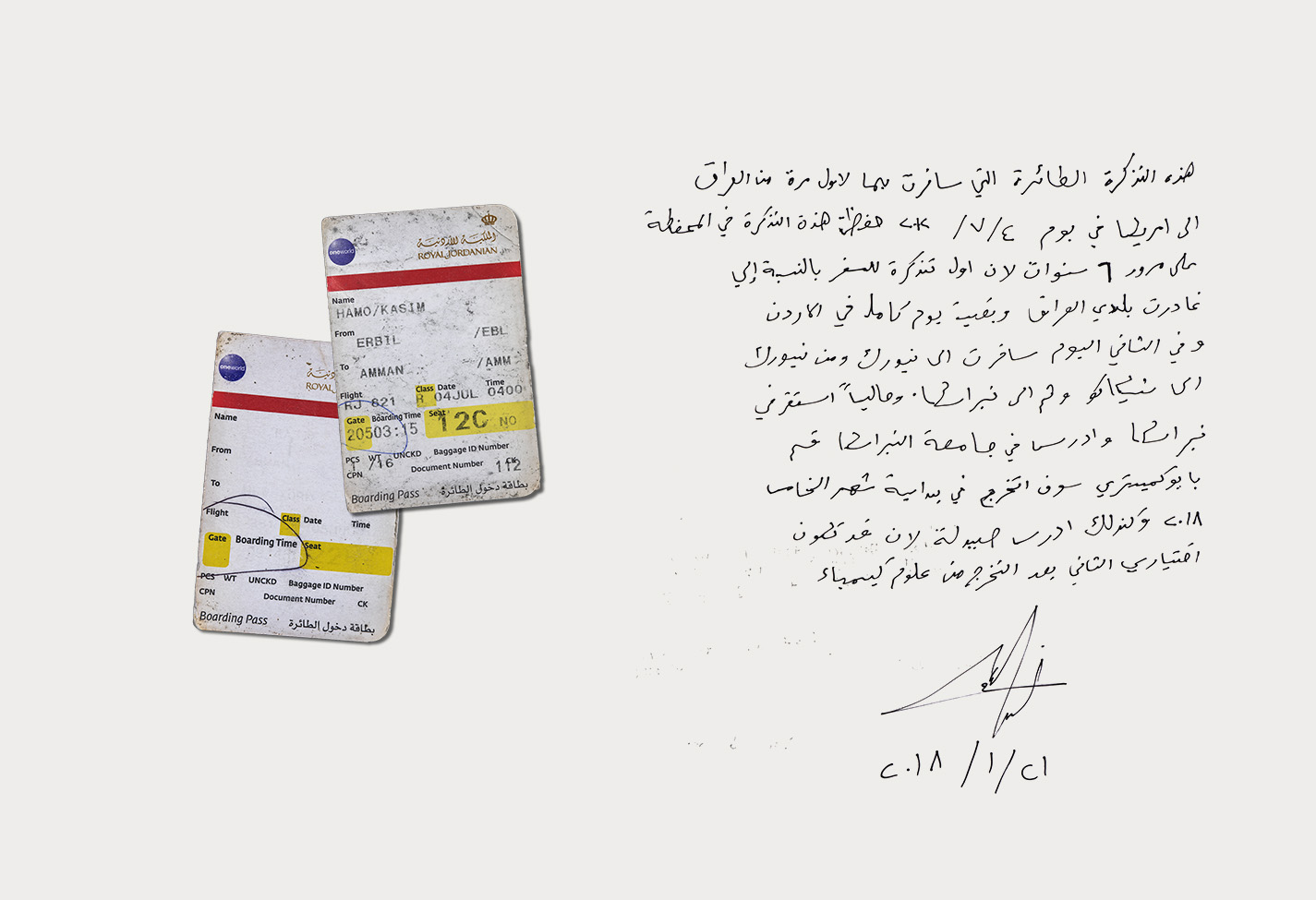 This is my ticket from when I first traveled from Iraq to the United States on July 4, 2012. I have kept this ticket in my wallet for the past 6 years because it reminds me of when I first left my country. I stayed one day in Jordan and the second day I went to New York then Chicago and finally arrived in Nebraska. Now I study Biochemistry and Pre-Pharmacy at UNL. I will graduate in May of 2018. – Kasim Hamo, Lincoln, Nebraska 2017 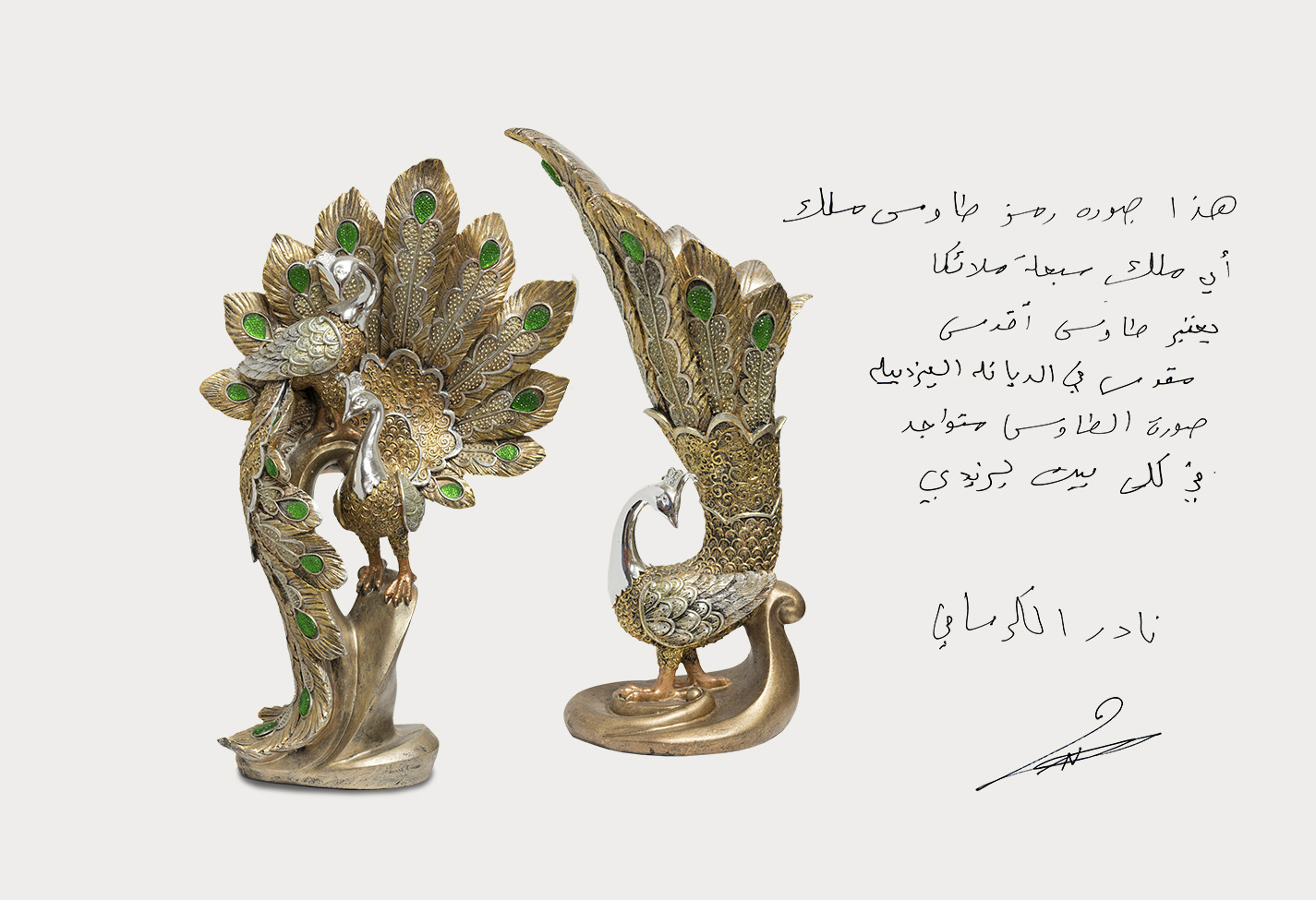 This picture is the symbol of Tawos Malak, one of the seven angles, the Tawos(Peacock) is sacred in the Yazidi mythology and almost each Yazidi family has one of this kind of picture in their house. – Nafel Al Odey 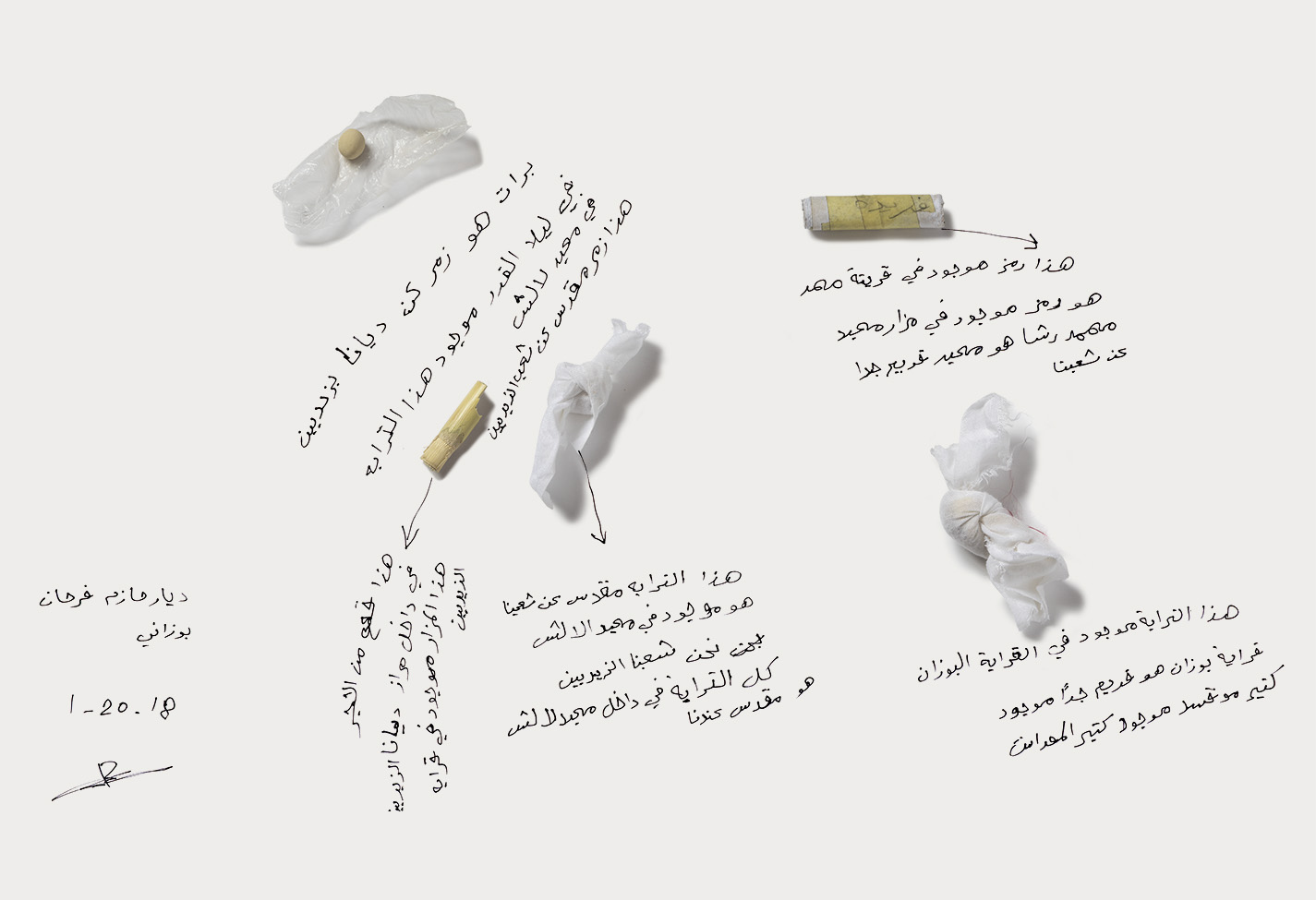 Top Left: This is called Barat. Barat is made of soil from the holiest Yazidi temple, Lalish. Religious Yazidis at Lalish make the Barat on one night of the year called Shevbratk which literally means the Barat night. Bottom Left: A small piece of wood from a small branch of a tree taken from one of the Yazidi holy places. Center: This soil is called Tobrk. It is holy soil that was taken from one of the Lalish temples. Most Yazidis have some Tobrk from Lalish. Top Right: This is holy soil or Tobrk from Mahma Rashan temple in northern Iraq (Kurdistan). Bottom Right: This is Tobrk from the Yzidi temple in Bozan village in northern Iraq. – Diar Alkhalo, Lincoln, Nebraska 2017 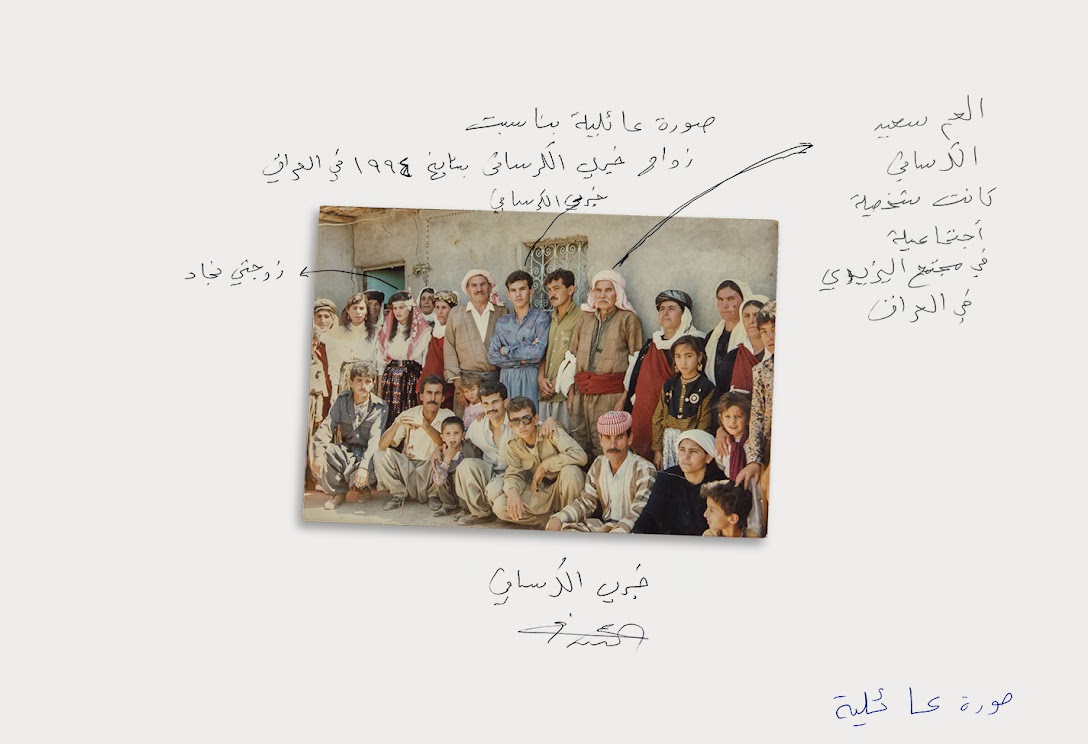 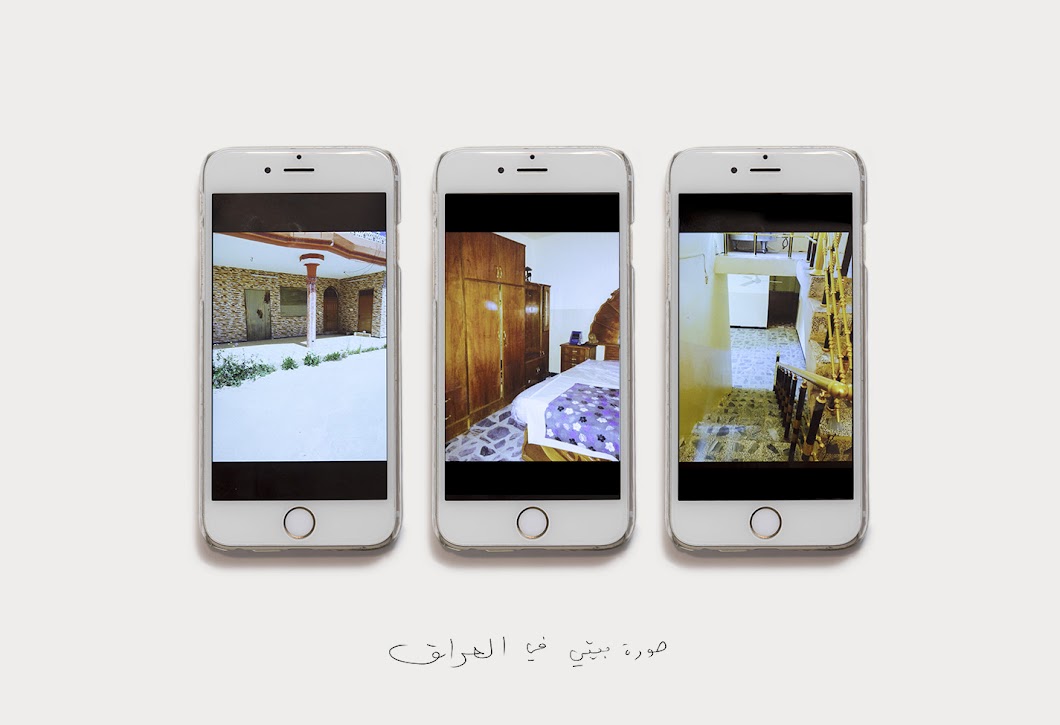 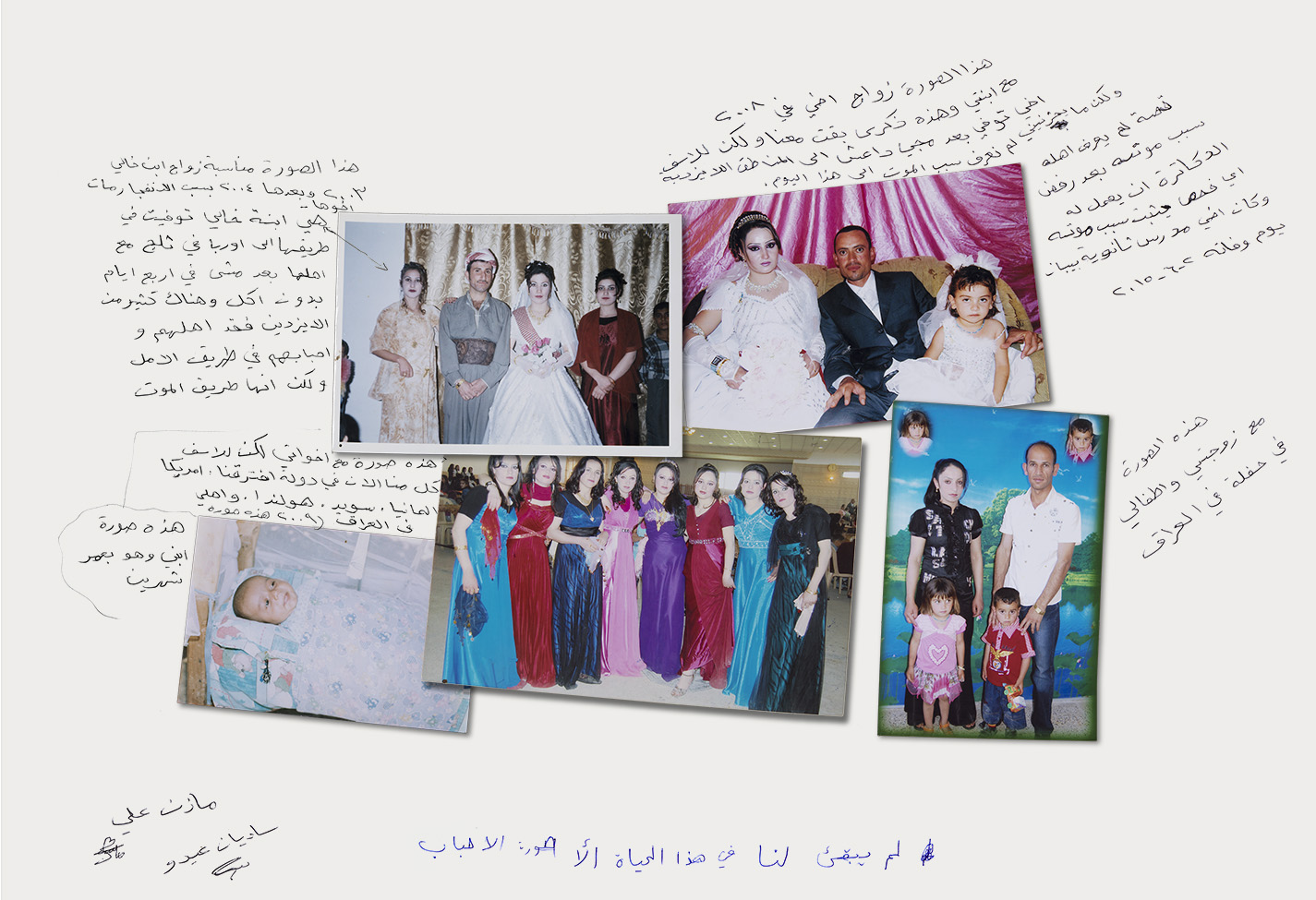 First Photo: This picture was taken in 2003 at my cousin’s wedding. In 2004 her brother died because of an explosion. My cousin died from starvation after four days of walking through freezing and snowy conditions on her way to Europe. Many Yazidis died for the same reason just to escape to Europe. Second Photo: This picture is of my sisters. Unfortunately each one of us is now living in a different country: United States, Sweden, Germany, and the Netherlands. Third Photo: This is my son at two months old. Fourth Photo: This is a picture at my brother’s wedding in 2008. My daughter is pictured on the right. Both of us keep a memory of that day. My brother died after ISIS attacked many Yazidi towns. What makes me sad is that we never found the cause of his death. The story of his death was never told to his family because the doctors refused to do the necessary body forensics. My brother was a teacher at Beiban High School. He died on June 2, 2015. Fifth Photo: This is a picture with my wife and children at a wedding party in Iraq. We have nothing left in this life but the photos of loved ones. – Sadiyan Alhido, Lincoln, Nebraska 2017 This piece 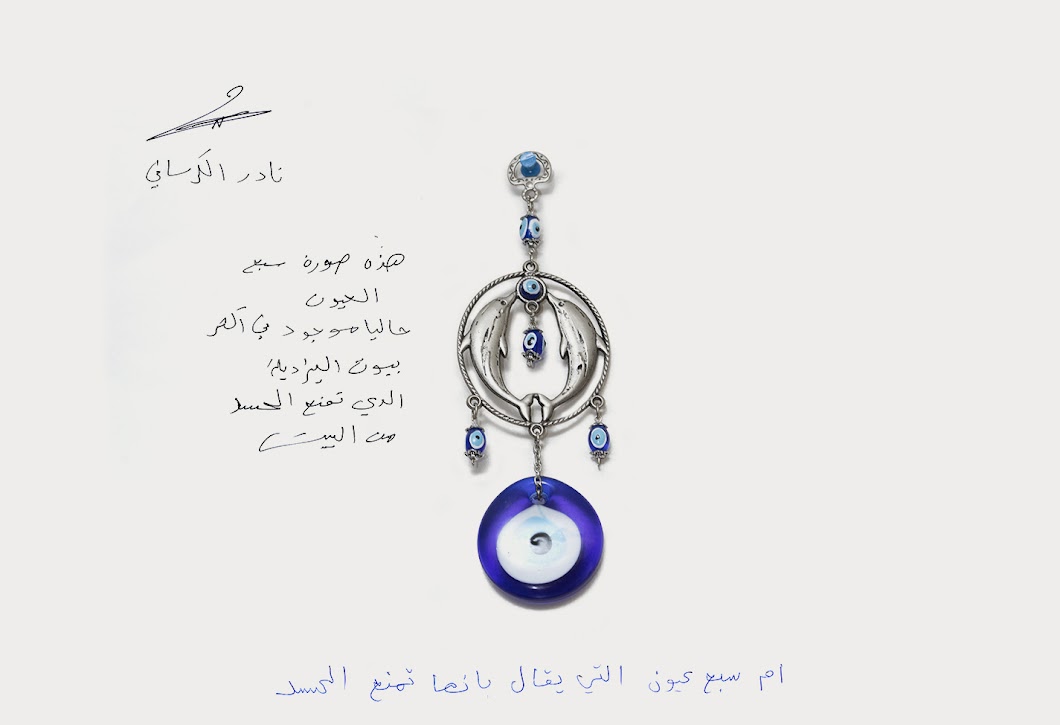 This is the Seven Eyes (Ginx Eyes). Many Yazidis have this in their houses. It protects them from people’s envy. – Nader Al Aode, Lincoln, Nebraska 2017 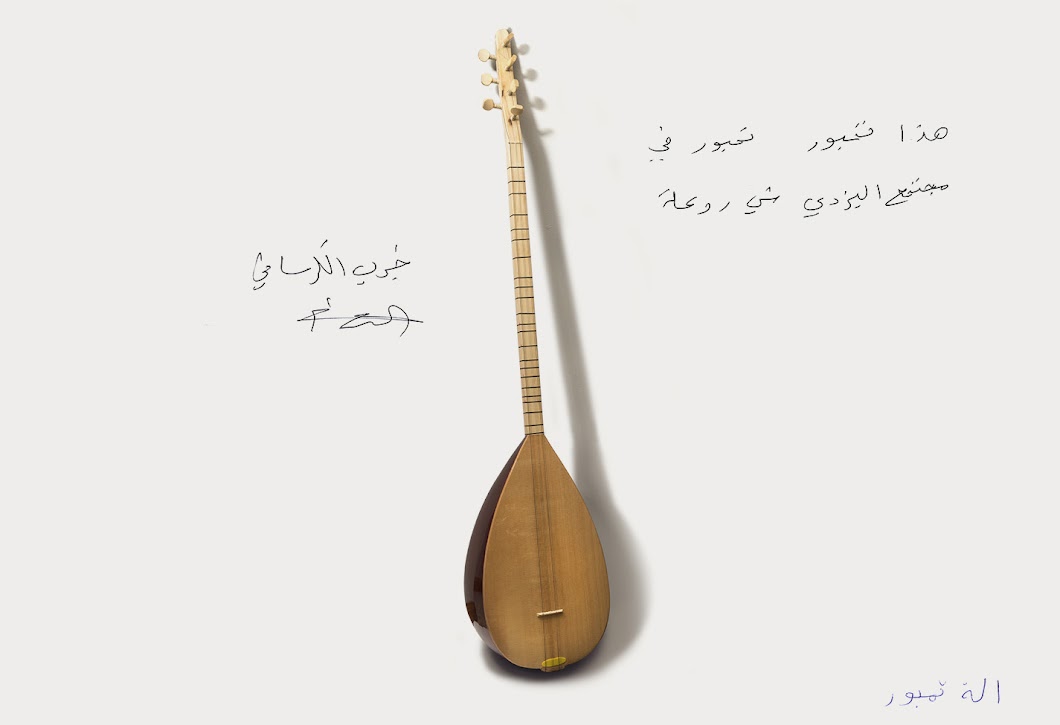 This musical instrument is called a Tambour. It can be heard in the wonderful music of the Yazidi community and culture. – Khiro Al Aode, Lincoln, Nebraska 2017 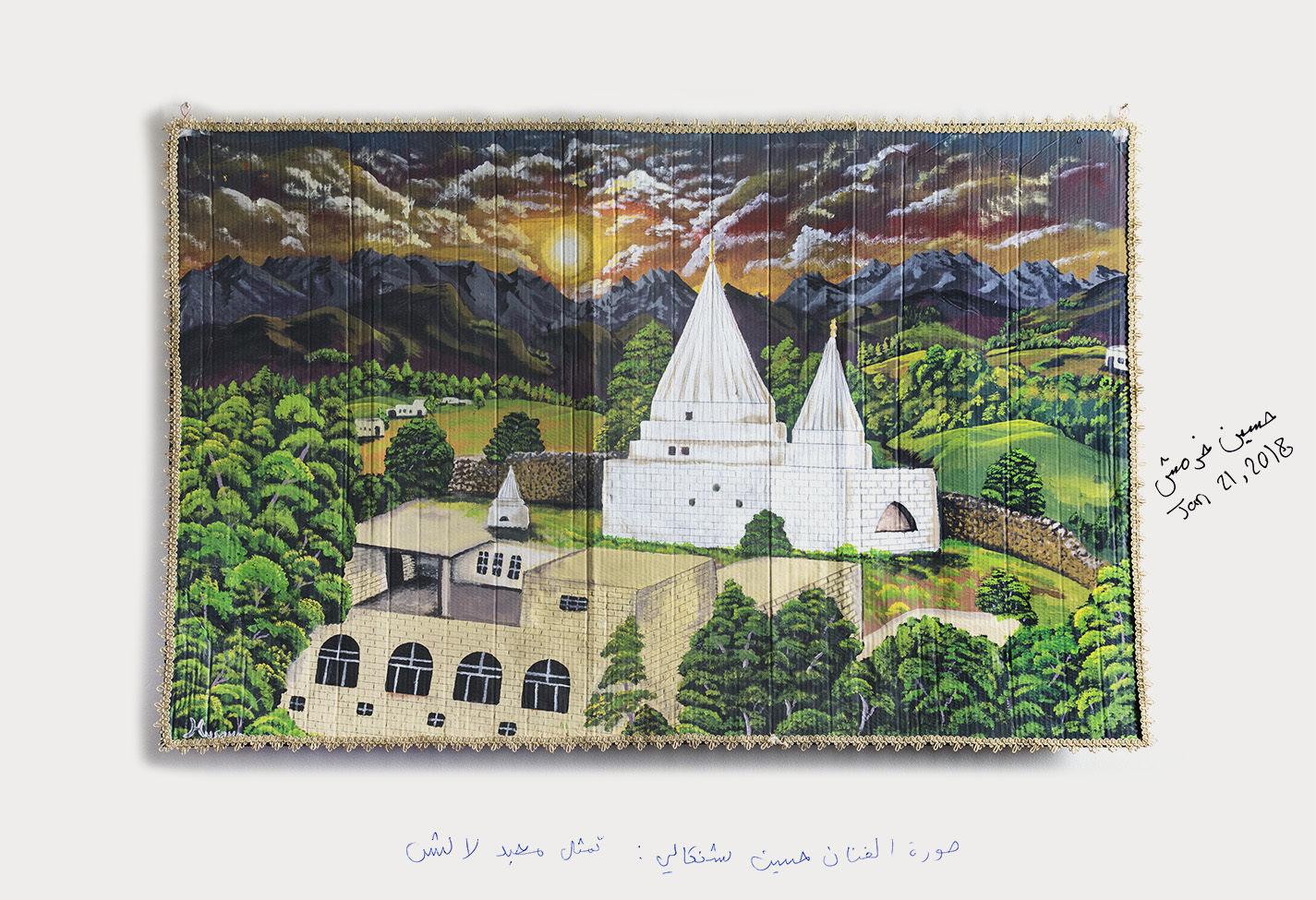 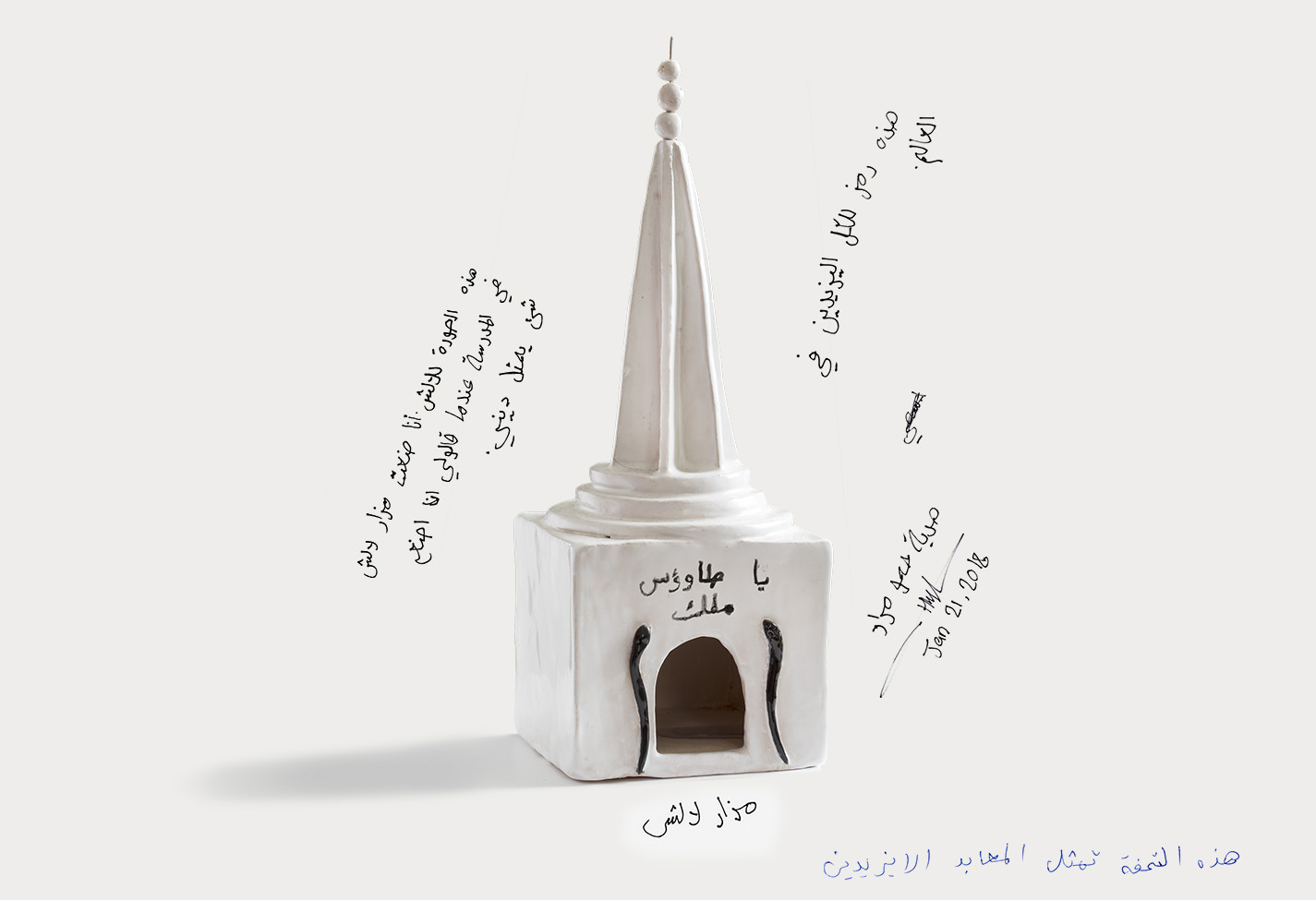 Lalish temple or Shrine, I made this at school when I was asked to make something that refer to my religion . This is a symbol to all Yezidis around the globe. – Hammo Murad's gift Signed And dated Jan 21 2018 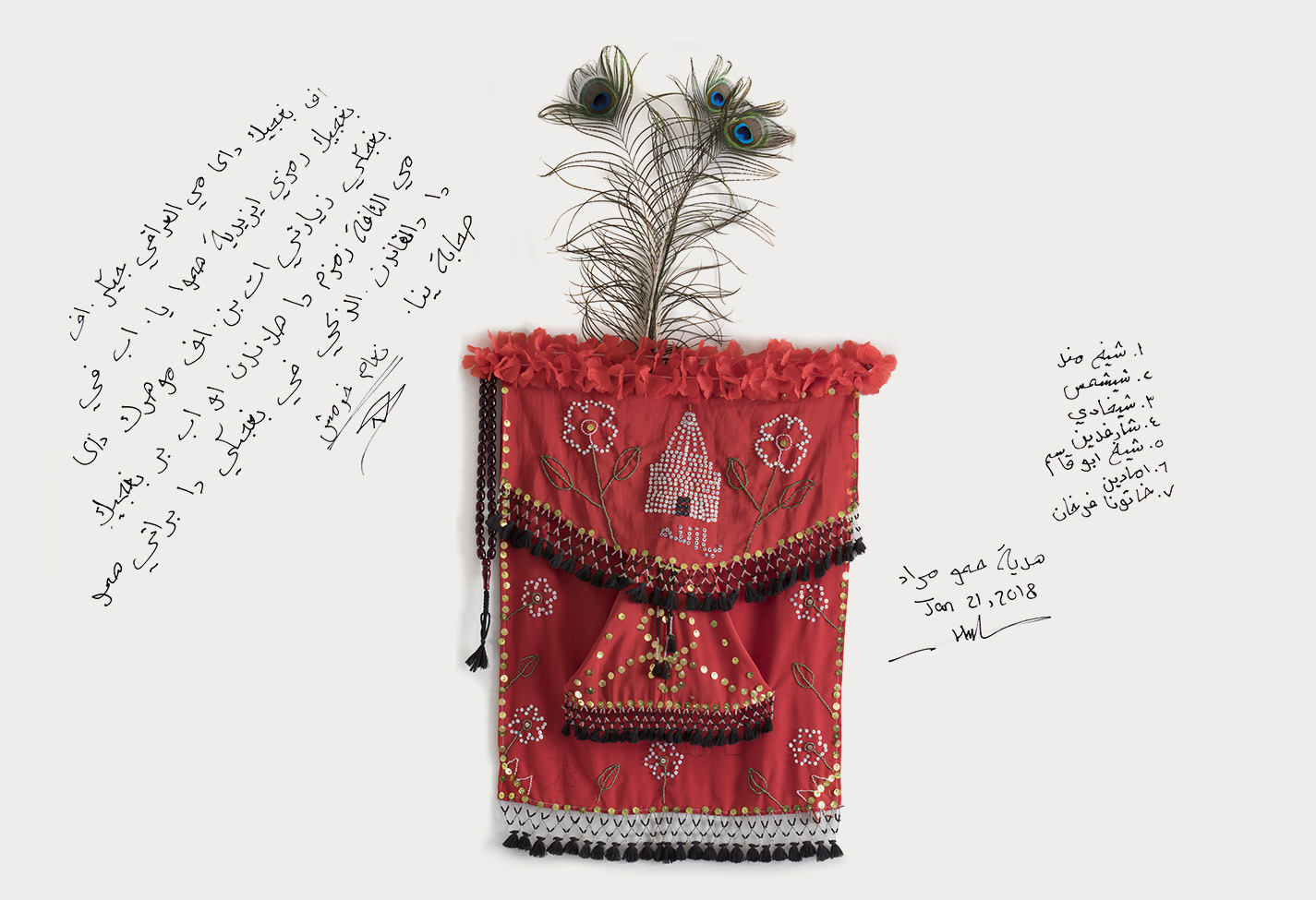 This holy pouch, called the Bukhechick, was made by my mother in Iraq and baptised with holy water at Lalish temple. Yaizidi when praying, face and kiss this holy pouch. The peacock feather represents the Yazidi Angle Peacock. Inside the Buckechick there are "Barat/s" ( a sphere shaped made of holy Lalish temple dirt).Each one of these Barats represent certain spiritual saints in the Yazidi religion. The Barats in this particular Buckechick symbolizing the following Yazidi Saints 1.Sheikh Mand 2.Sheikh Shams 3.Sheikh Ago 4.Sharfadeen 5.Sheikh Abu Alqasim 6.Amadeen 7.Khatoona Fakhran Gifted by Hammo Murad signed and dated Jan 21 2018 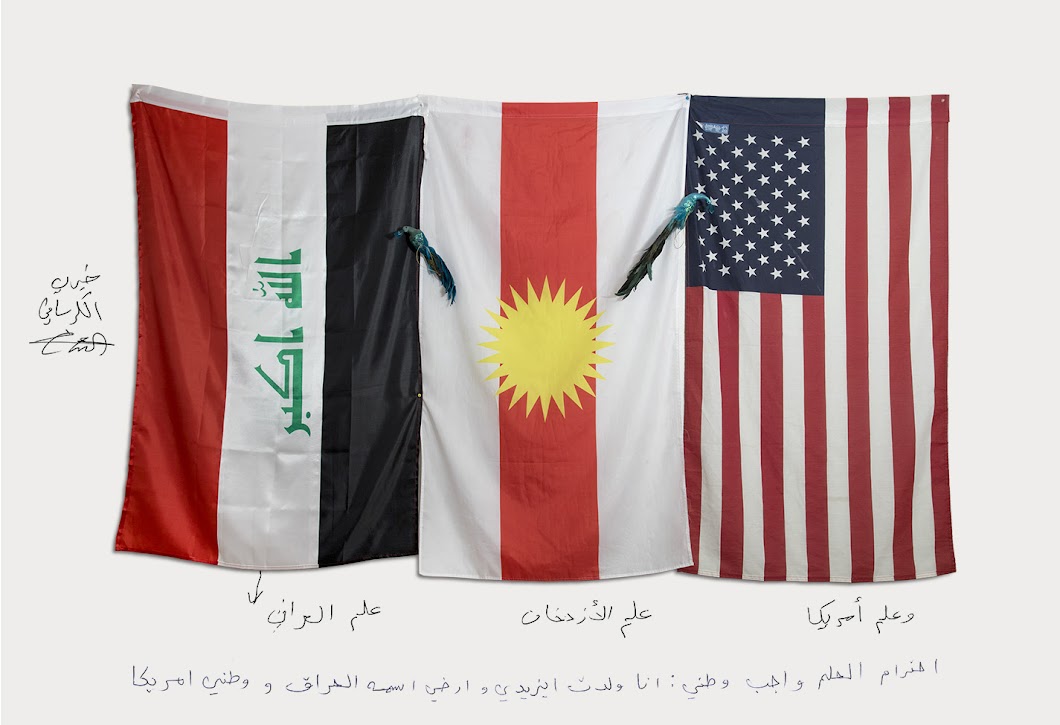 Iraqi flag – Yazidi flag – American flag – The respect for the flag is a national duty: I am born as Izidi, my land is Iraq, and my country is America. – Khairi Al-Karsafi, Lincoln, Nebraska 2017